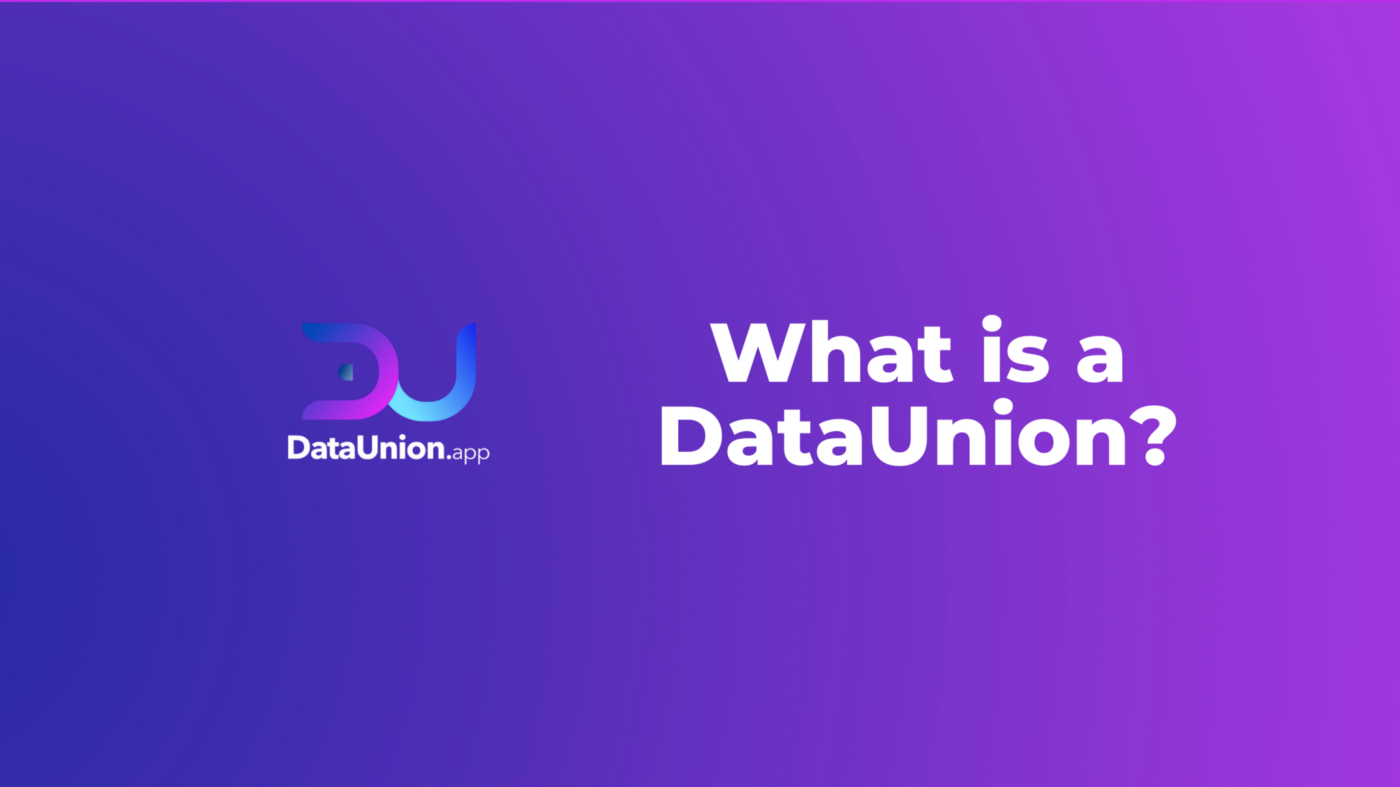 Every day, 2.5 quintillion bytes of data are created by us, the Internet users. To put that into perspective, if you were to take an equivalent amount of pennies to match that amount of data and lay it out flat, it would cover the Earth’s surface five times over (now that’s a lot of pennies.)

There is no denying that we are globally becoming ever more interconnected. Every day another data centre somewhere in the world is born, and another Big Tech executive is excited at the prospect of syphoning your data for their profit, but it doesn’t have to be that way.

Through the use of DataUnions, there is a way for people to take an active role in data ownership and the value that it creates.

A DataUnion is formed when a collective of individuals and organisations join their data together and then get fairly compensated for their contribution, annotation and validation of data, and the insights created from it. It removes the need for middlemen and allows for the democratisation of data while simultaneously sharing in the value created by participating (not bad, right?)

Currently, the vast majority of the world’s monetised personal data is controlled by a select few often referred to as the Big 4 (Google, Facebook, Amazon, Apple), and with how quickly technology is progressing, soon, every toaster, oven, chair, or bed will have implanted sensors churning out exponentially high amounts of personal information as the Internet of Things (IoT) trend continues to expand. Big Data is worth roughly $131 Billion and is expected to grow to double that by 2026.

As of 2022, a lot of data is created, consumed, captured, stored and finally sold off to the highest bidder and the public is not getting their fair share of the pie.

However, times are changing.

The great monopolies of Big Tech & Big Data are slowly being revealed to the public, and a push toward more transparent data privacy regulations (such as the EU Data Act) means people are becoming increasingly more aware of how their data is being tracked, used and sold.

The world is changing, and Web3 technology allows us to create decentralised and democratised DataUnions for a better future.

So, what is a DataUnion?

Let’s start with some definitions:

Data def. information, especially facts or numbers, collected to be examined and considered and used to help decision-making, or information in an electronic form that can be stored and used by a computer.

Union def the act or the state of being joined together.

In its most simple form, a DataUnion is where various sources of information in electronic form are joined together.

When it comes to creating insights and training AI algorithms, one of the key steps is curating, cleaning and verifying the data set that will be used. This process has usually occurred as a siloed operation by the party interested in generating the insights. This is a resource-intensive process, sometimes requiring thousands of hours, which usually comes at a high cost.

When a centralised entity creates and cleans the underlying data sets that will be used by the algorithms, there are usually only a maximum of two winners. The company that was paid to create the data set and the company selling the insights created from the data.

With a Web3 powered DataUnion however, we can open up the entire process flow. We can allow individuals, organisations and companies to work together to upload, annotate and verify the data. Instead of then simply selling this data, the union can then allow algorithms to be trained on the data for a fee. The fees generated, and the value created by the DataUnion can then be shared with all participants involved in the process.

This is the new data economy.

The world isn’t a zero-sum game. Our ability to collaborate and create exponential value isn’t a new concept. But right now, the world is on the precipice of the next technological evolution as we shift towards the Web3 world.

In the web2 world, your data is collected, stored and monetised with no real thought about the user who created it, you. The value created by these platforms is used to grow behemoth companies and enrich shareholders.

In web3, through DataUnions, everything changes. Now, you can contribute data to a union. You can help annotate and verify that data. But best of all, you receive a share of the value that’s created from your, and everyone else’s, inputs. Everyone is rewarded for contributing and the middle man gets cut out — a win-win.

DataUnion Foundation is a cooperative protocol built on top of Ocean Protocol — an open-source, layer 2 protocol, built on Ethereum, that aims to allow businesses and individuals to exchange and monetize data and data-based services.

DataUnions can gather and store information that can later be accessed by 3rd parties to run specific algorithms on it to get beneficial results back. That’s a mouthful, but basically, it means 3rd parties can access the collected data set, and train their AI models on it to get their desired results back without needing to copy the data.

This means better trained AI algorithms can now be built while preserving the privacy of data, leading to life-altering innovations across business, science and technology!

We know it can get confusing with terminology but it is important to distinguish between DataUnions and what our mission at DataUnion Foundation is. We are creating a decentralized, collaborative protocol that brings the value of data, and its insights, back into the hands of everyone who participated in the process of uploading, annotating and verifying data sets -– for the purpose of training better AI algorithms.

In comparison, many other unions currently on the market simply collect raw data and then sell that data set to interested third parties. This approach works but it wastes a lot of potential, both in how much value the collected data provides to those that purchased it and in how little value the data contributors receive for providing their data — we are working to change that. Instead of only collecting raw data (meaning not processed, or checked for quality), our protocol collects data, annotates it and verifies its accuracy through human input, so that the resulting data sets contain the most beneficial information for an AI algorithm to use. Additionally, we take things a step further by then creating a system for data contributors to receive rewards for their contributions even after they have already been bought by third parties — similar to a royalty check, and something no other data union can offer.

To put this into a non-data perspective, think of us as a refinery that collects crude oil, enriches it, and then sells the refined version to interested third parties–providing greater value to those who buy it while simultaneously sharing in the value created from each barrel.

Our collaborative protocol pioneers a new, global data economy that is fair, democratized, transparent and equitable so that everyone can share in the value of data to build for a better tomorrow.

Now It’s Your Turn To Get Involved

We want to connect with like-minded individuals & organizations striving towards the common goal of building a fair and equitable data economy. Does that sound like you, or maybe someone you know? Connect with us through one of the links below — we can’t wait to have you join us!